The INSCYD Virtual Lab - what does it tell us? 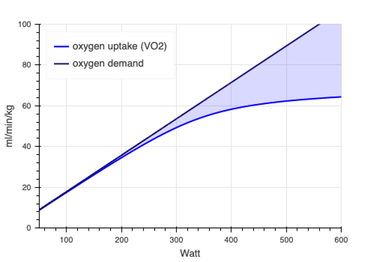 Back to INSCYD overview
The INSCYD virtual lab gives us a comprehensive breakdown of the athletes physiology and lets us make informed decisions about how they can improve. The following gives an idea as to the depth of detail that the tests reveal about the way your body responds under effort, and at which point your body utilises different fuels etc.  For most people, the Training Zone example at the end of the page will be the most relatable output.

Contact us to book your own test and 6 week plan

Each athlete that performs the INSCYD virtual test with us will get a performance test report. We will debrief the contents of the report so that it makes sense and we will provide a 6 week training program based on the test results and the athletes objectives.

As part of the test, the software will take the athletes body composition (height, weight, % fat) and produce a body composition graph. It will show you how the body is made up along with performance related information such as lactate distribution and active muscle mass. This is a useful tool to track changes in your body composition as you go through the
season or as you progress through a training program


Metabolic Demand & VO2
​The above graph shows the power output at which oxygen demand outstrips oxygen update. In simple terms, as soon as the 2 lines deviate, you'll be utilising more glycogen as the body tries to utilise energy from other sources - a very useful number to know when you're making a long effort and might need to ease back - this will give you the data to make that decision. 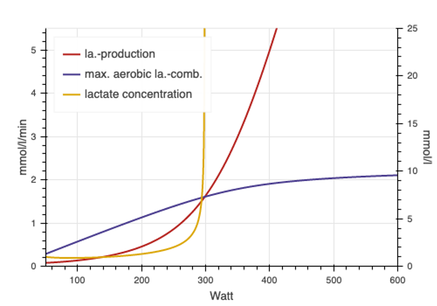 In this graph, the gross lactate clearance rate is shown in blue, lactate production in red and lactate concentration in yellow. During exercise, lactate is cleared from the muscle cell by aerobic metabolism (oxidation). Put simply, lactate gets burned and acts as a fuel in aerobic metabolism. Therefore, the rate at which lactate can be cleared is directly related to the actual oxygen uptake. You will notice that the shape of the blue lactate clearance curve looks similar to the oxygen uptake curve above. The red curve shows the actual lactate production. As lactate clearance, the unit here is mmol/l/min. Look for the crossing point of the lactate production (red) and the lactate combustion (blue) – this is intensity of anaerobic threshold. At any intensity below, it can be seen the possible combustion of lactate is higher than the actual production. At any intensity above this crossing point, the lactate production rate is higher then the possible combustion rate, which results in an accumulation of lactate. The yellow line shows the lactate concentration in steady state conditions – this is a result of the production and clearance rates described above. Steady state means that time is infinite, and therefore shows the concentration that lactate concentration (in mmol/l) would reach. At anaerobic threshold – also known as maximum lactate steady state, the curve increase to infinite as no steady state can be reached anymore.

Lack of pyruvate and lactate accumulation 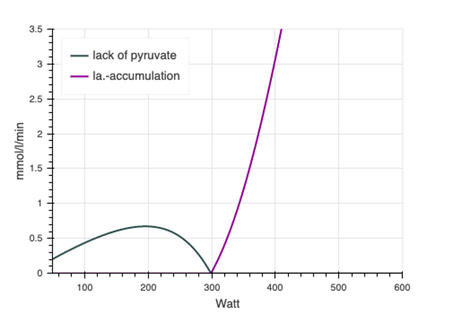 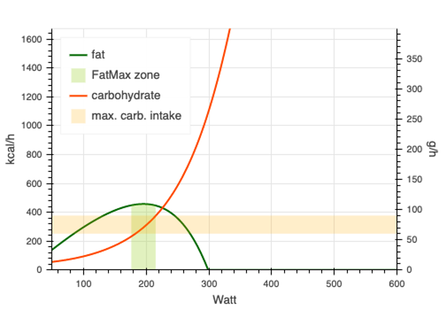 
So, what does it all mean?

All of this data plus the personal metrics that you supply are used to produce individual training zones - turning the information displayed above into a usable and practical training aid.
​

The table above shows your individual training zones. These zones are not generated as fixed percentages of anaerobic threshold, FTP, or other static metrics, like you get elsewhere.

Each zone listed here has its own individual origin, and is related to an actual performance metric = your current status.

For each zone, you will find an upper and lower intensity limit, plus the target value, which you should focus on when training in this zone. Where applicable the energy consumption per hour is listed and the distribution of fat and carbohydrate – both in percentage and as absolute consumption in grams per hour. You can use these numbers to better understand how you fuel yourself while training in those zones. Furthermore, you can see how much total fat you can burn in each zone.
Zones defined:
Zone 1 – recovery: the lowest intensity zone. Used mostly used for easy training, rest days and in between intervals.
Zone 2 – base: this is the “bread & butter” zone for endurance training. Zone 2 is the zone in which the long endurance training is to be completed.
Zone 3 – medio: a mid intensity zone, between the base endurance, and anaerobic threshold.
Zone 4 – FatMax: the intensity at which the consumption of fat as a fuel is highest.
Zone 5 – anaerobic threshold: the intensity at anaerobic threshold (lactate production rate equals lactate clearance rate).

Contact us to book your own test and 6 week plan